The State of the Menstruation Nation

Don’t you think it’s odd that something as natural as your monthly period, can feel as unnatural as it does? Cramping, pain, irregular bleeds, periods that are full-on one month and ghost you the next, low energy, low mood, high stress...you wouldn’t choose any of this normally right?

And yet, when it comes to periods the bar of what we’re willing to overlook is so low. We accept that for about a week, every month, for maybe 40-odd years, we will feel...not so good?

Now we don’t know about you but that doesn’t exactly sound like a healthy relationship.

In case you haven’t already checked it out, we recently launched a Cycle Quiz, to help friends of Eve, and—real-life period-havers—learn more about the important insights they can get from their monthly cycles.

We didn’t expect it to have quite the response that it did, with over 1500 quiz-takers in just a few days. On reading into the overall trends, we were genuinely quite shocked. The story it painted about the state of our periods and overall hormone health wasn’t at all what we expected to see.

The good news is - if you don’t love your period - you’re certainly not alone. The not-so-good news is that, if we all feel this way - how is it that nothing is being done about it?

From this simple quiz, we found that the biggest issues affecting us are:

The State of Our Cycles:

When it comes to your period, a cycle anywhere between around 21 days and 35 days is considered ‘normal’. In a nutshell, day 1 is the day your period starts and goes for about 3-7 days, around the middle comes ovulation, then about 2 weeks later the whole thing starts again!

From the quiz, we learned that a whopping 46% of people said that their period didn’t fit within those ‘normal’ parameters; showing up randomly, for too long, or not at all.

As many as 40% worried about their period leaking through their clothes and 45% said that their skin is affected by their periods.

In the same survey, as many as 38% of people noted that they often feel irritable or down for no particular reason.

A further 51.0% mentioned that their mental state can take a turn for the worst around the time their period is due. So, it’s not really a stretch to say that the majority of people experiencing a cycle aren’t looking forward to it...

The State of Our Stress:

The problem with stress is that it has a good publicist. We think if we’re stressed and we’re run off our feet that means we’re succeeding and important and it sounds more relatable than “I’m really overwhelmed and burnt out”. What we don’t realise (or dwell on) is the impact it has on our bodies.

If we didn’t already know all of this from talking to our friends and other people like us, our quiz taught us that 36% of people consider their stress levels to be higher than they should be.

Stress raises our levels of stress hormones, and when those levels aren’t balanced, the rest of our body is under strain which has knock on effects to our sleep, mental health and sex hormone balance.

In fact, over 45% of quiz respondents said that feelings of anxiety and overwhelm are a common problem in their daily lives.

Another very shocking statistic was that 64% described their libido as either low or non-existent.

If this doesn’t ring alarm bells about the state of our stress levels and hormone health right now what else does. Add all of that to this generation’s already-growing levels of anxiety and you’ve got a big need for a big chill.

The State of Our Contraception

Hormonal contraception has a complicated hold on our hearts. The invention of the pill in the ‘70s was undoubtedly one of the greatest gifts science gave to women’s liberation but sometimes it feels like the recipe hasn’t changed all that much since.

Because it’s so effective at preventing pregnancy, we aren’t really told that much about how it works and its side-effects, instead it’s almost as though we’re expected to just be grateful that it does its intended job.

As an example, an out-of-this-world 92.6% of respondents have never been told that taking the pill increases their need for magnesium, zinc, and B vitamins. 92.6%.

The pill not only increases the need for these but it also strips our bodies of that which is already in our system. As such, we need to up-stores regularly.

Only 12.5% of respondents said they take the oral contraceptive pill, but of those, 62.8% aren’t all that keen to be on it, wishing there was a better option.

It makes sense you feel like that because it quite literally interrupts our hormones which, when you think about it, is quite an unsettling concept. For comparison, the reason that a male OCP never got the green light is because the low-risk side-effects were considered too dangerous for men [insert a series of upside down smiley faces here].

When it comes to your personal period, you’re the biggest expert there is. Once you’re armed with the right information then you can start demanding the right kind of self-care and tools to make your time of the month just another week on the calendar.

We’ll be the first to tell you that you deserve to live your life without being held back. It’s time to live, not just live with it. 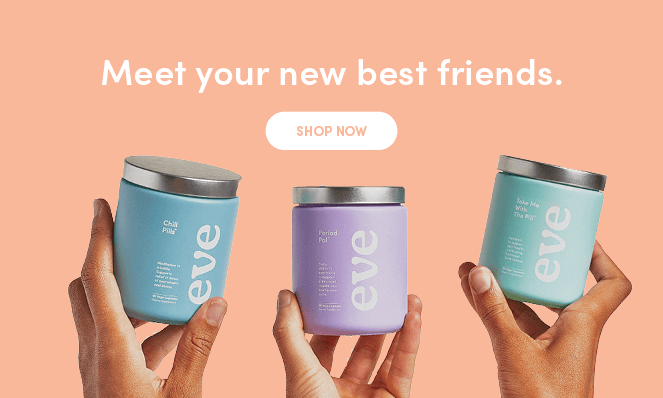 See all
Disclaimer: This blog post is for educational purposes only. It is not designed to diagnose, treat or cure. We are all unique. For your individual health concerns, it is important to discuss these with a relevant health professional.

5 Reasons We Get Heavy Periods (And How To Lighten Them)

On The Pill? Here Are 5 Ways To Support Your Body

Join our email list to stay up to date

DISCLAIMER: As each person is different, individual results cannot be guaranteed.